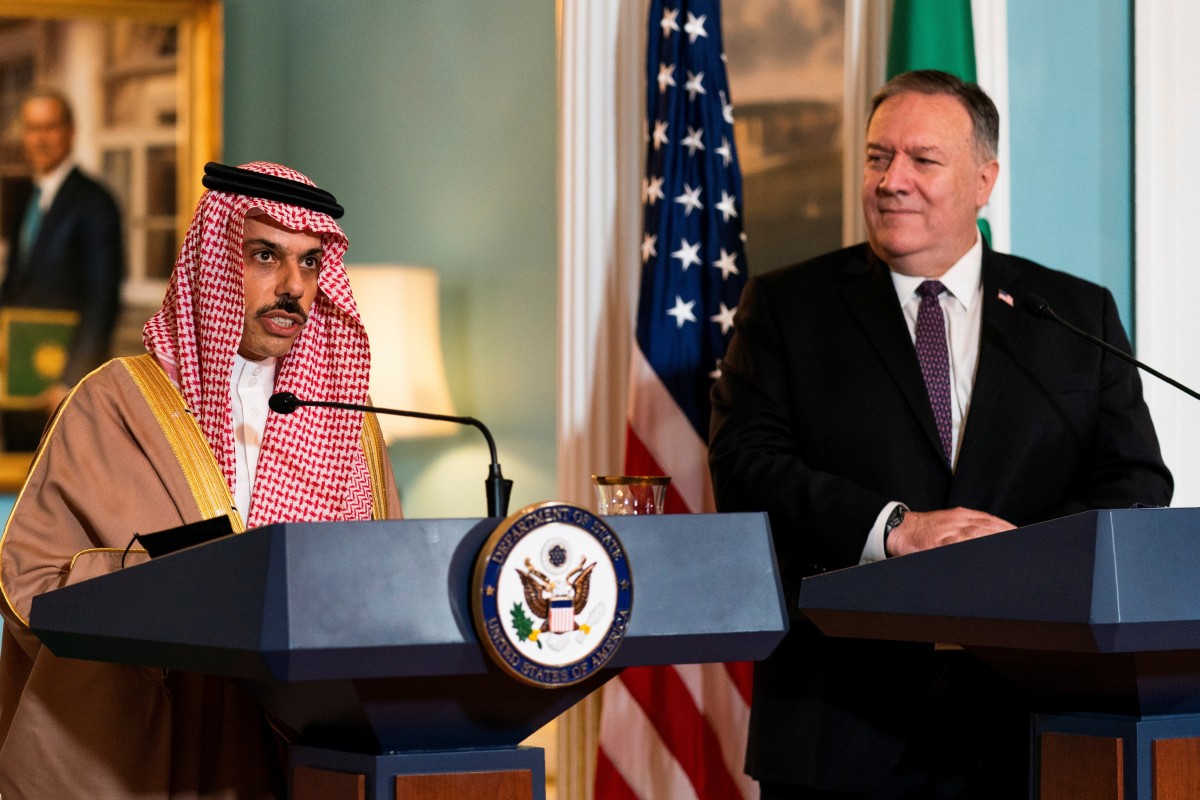 The Governments of the Kingdom of Saudi Arabia and the United States held a meeting of the Saudi- U.S Strategic Dialogue on October 14, 2020, in Washington, D.C. His Highness, Foreign Minister Prince Faisal bin Farhan Al Saud and Secretary of State Michael R. Pompeo co-chaired the Dialogue. Building on decades of close partnership and previous strategic discussions and cooperation, the two countries highlighted the significance of this Strategic Dialogue, held 75 years after the historic meeting in 1945 between President Franklin Delano Roosevelt and King Abdul Aziz Al Saud aboard the U.S.S. Quincy, a meeting that laid the groundwork for the enduring strategic partnership between the United States and Saudi Arabia.

During the Dialogue, the United States and Saudi Arabia reviewed the extensive security, economic, cultural, and people-to-people ties that underpin their bilateral relationship. Both sides reaffirmed their mutual dedication to countering and deterring the threat that Iranian malign activity poses to regional security and prosperity. The United States recognized the Kingdom’s leadership within the Saudi-led Coalition and its commitment to end the Yemeni conflict through political negotiations. The United States and Saudi Arabia stressed the importance of their close partnership in countering terrorism and the Kingdom’s key role in maintaining regional and international security, and the two countries reviewed mutual efforts to strengthen security in Iraq.

The United States recognized the significant strides that Saudi Arabia has made towards implementing Vision 2030 and ushering in major economic and social reforms, and its leadership of the G20 during its presidency year to support the global health and financial response to the COVID pandemic. The United States welcomed the G20 Leaders’ Summit in November. Both sides recognize progress remains essential on core issues of national interest and seek to continue to work closely towards this end through the Strategic Dialogue with an eye toward the future of the strategic relationship.

The United States and Saudi Arabia underscored their dedication to security and economic partnerships. Both sides discussed the various aspects that constitute the cornerstones of our enduring strategic partnership and intend to continue the work to further strengthen and deepen the partnership for the benefit of both nations, and the region.

The discussions included:
- Defense cooperation to deter and defend against common threats in the region.
- Security and intelligence cooperation between the two countries, which has been instrumental in saving countless American and Saudi lives, and many others, in our continuing fight against terrorist and violent extremist groups, including Al Qaeda, ISIS, and the Islamic Revolutionary Guard Corps – Qods Force, as well as its proxies and partners.
- Continued cooperation in the areas of critical infrastructure protection and public security, including under the bilateral Technical Cooperation Agreement.
- Enhancing cooperation to promote resilient energy markets, especially in light of the economic effects of the COVID-19 pandemic.
- Enhancing economic ties by expanding commercial opportunities, investing in infrastructure, and restoring international travel and transportation as part of the economic recovery.
- The importance of using only trusted vendors in critical information and communications technology infrastructure.
- Exploring new areas of cooperation in cybersecurity and other related areas, as well as strengthening cooperation in areas such as critical infrastructure protection.
- Enhancing diplomatic, cultural and consular cooperation, including the major construction projects to expand the U.S. Embassy and Consulates in the Kingdom, which will serve to expand the U.S. platform for diplomatic engagement with Saudi Arabia and signifies our enduring commitment to achieving our mutual security and economic objectives.