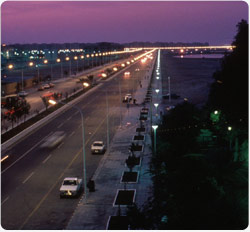 At the time of the establishment of the modern Kingdom of Saudi Arabia in 1932, the country lacked modern transportation facilities and ports, and had less than 30 miles of paved roads.

Today, the Kingdom has a modern transportation network of roads, railroads, air, marine and public transport. The country is also linked by a sophisticated communications network that serves as a basis for its economic growth and development.

These accomplishments are all the more remarkable due to the great distances between cities and the rugged terrain of much of the country.

For thousands of years, merchants, pilgrims and Bedouins have been traveling the ancient trade and caravan routes of the Arabian Peninsula. Journeying through such a vast desert region was extremely difficult and risky, often taking a month or more of arduous travel to cross the peninsula. Passage through the vast deserts was only possible during the cooler hours of the day and less harsh seasons of the year.

The swift movement of both people and freight was vital to modernizing such a large and sparsely-populated country. To that end, a number of the five-year development plans focused on improving the Kingdom’s transportation infrastructure, and Saudi Arabia now possesses one of the finest national transportation networks in the world. 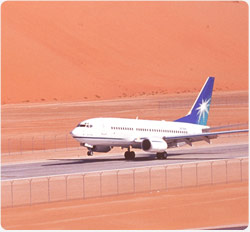 Plans are underway to convert the Prince Muhammad bin Abdulaziz Airport in Madinah into an international airport. There are also 24 regional and local airports.

The airline now has a fleet of around 140 aircraft with flights to cities within Saudi Arabia and around the world. It continues to expand its fleet, recently purchasing 15 regional aircraft from the Brazilian company Embraer.

Saudi Arabian Airlines carries around 15 million passengers annually, one third of them international flights. Almost half of SAA’s 2,000 pilots are Saudi.

Saudi Arabia has made a special effort to expand its air transport facilities to accommodate the some two million Muslim pilgrims to come to the Kingdom each year.

In addition, Saudi Arabian Airlines runs extra flights during the hajj to accommodate the large number of pilgrims who travel to the Kingdom by air. 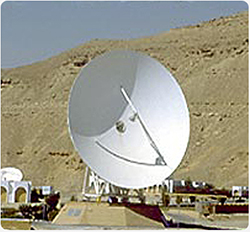 Saudi Arabia’s telecommunications sector is growing at a remarkable rate. Facilities and services are constantly being expanded to accommodate the Kingdom’s growing market.

The major provider in Saudi Arabia is the partially privatized Saudi Telecommunications Company (STC), one of the largest telecom services operators in the world. A second company, Mobily, also provides mobile phone service.

Mobile phones are extremely popular in Saudi Arabia. In 2002, there were more than 5 million mobile phones in use in the Kingdom. Saudi Arabia’s mobile telephones operate on the Global System for Mobile Communications (GSM), one of the leading digital cellular systems used all over the world.

Internet usage is growing rapidly in Saudi Arabia. More and more lines are being provisioned for Internet access to accommodate increasing demand, including high-speed service such as DSL. According to a 2003 Zogby poll, nearly two-thirds of Saudis have Internet access.

The Communications and Information Technology Commission (CITC) supervises all operations of the Kingdom’s Internet sector. CITC also helps Saudi families own personal computers and access the Internet through the Saudi Home Computing Initiative.

Saudi Arabia also sends satellites into space. In 2006 alone, the Kingdom plans to launch six Saudi-built satellites for communication and observation. The King Fahd Satellite Communications City in Jeddah is the largest such complex in the Middle East. It is also the ground station for Arabsat, the leading communication satellite in the Arab world.

The second Arabsat satellite was launched on June 17, 1985 with the help of Saudi Payload Specialist Prince Sultan bin Salman – the first Arab and Muslim to travel to space – during his mission onboard the US space shuttle Discovery. 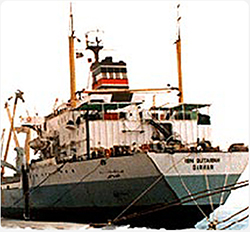 The Kingdom’s ports are operated by the Saudi Ports Authority, which supplies equipment and building piers. Maintenance is provided mostly by private companies.

More than half of Saudi Arabia’s sea traffic passes through the Islamic Port of Jeddah, one of the main ports in the Middle East and an entry point for pilgrims. New port facilities at Yanbu Industrial City on the Red Sea have eased Jeddah’s load and improved the efficiency of petrochemical exports. Other major ports are located in Dammam, Jizan and Jubail.

In addition, the massive King Abdullah Economic City near Jeddah, which is currently under construction, will also have its own dedicated port. Ground was broken for the massive commercial and residential megaproject in December 2005.

Ports for fishing boats and small freighters have also been constructed or upgraded, and in the late 1990s a private tourism company established hydrofoil service to link Jeddah with several industrial and urban centers along the Red Sea. 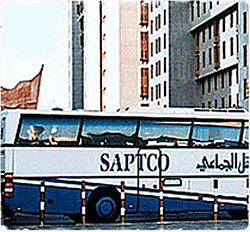 The Saudi bus network provides affordable transport both within and between the Kingdom’s cities.

Operated by the Saudi Public Transport Company (SAPTCO), the fleet consists of over 2,000 buses. It carries annually more than 3 million passengers within large urban centers such as Riyadh, Jeddah, Dammam, Madinah and Makkah, and to cities and towns across the country. There are also 10 international routes that are used by nearly half a million travelers each year.

SAPTCO operates special bus service during the hajj, the annual pilgrimage to Saudi Arabia’s holy sites. During this time, as many as 15,000 extra buses carry pilgrims to and from Makkah. 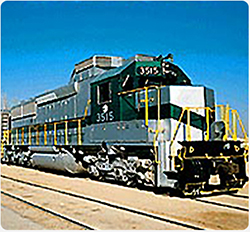 Saudi Arabia has a comprehensive road network that comprises some 100,000 miles of roads, facilitating civilian travel and commerce.

Particularly spectacular are the highways, which boast impressively engineered tunnels and bridges that are a monument to modern road-building techniques. For example, the road through Al-Hada Mountain has cut the distance from Taif to Makkah by about 30 miles.

And the first highway tunnel in the world to use solar photovoltaic technology – converting solar energy into electricity – was built in the hilly Abha region of Asir Province.

Perhaps the most spectacular road in the Saudi network is the King Fahd Causeway, which links Saudi Arabia to the island nation of Bahrain.

At 15.5 miles, it is the second longest causeway in the world, an engineering masterpiece that spans long stretches of sea and reclaimed land. Its five bridges rest on 536 concrete pylons, with seven embankments in the Gulf’s shallower water. One embankment is actually a sizable artificial island complete with customs and immigration facilities, a mosque and a restaurant.

Since its completion in 1986, the causeway has streamlined commerce and strengthened the cultural and social bonds between Saudi Arabia and Bahrain. Under consideration is a second causeway that would link Saudi Arabia and Egypt. The 9.24-mile causeway would run across the Red Sea to connect the Saudi coast with Egypt’s Sinai peninsula, linking the eastern and western flanks of the Arab world.

Saudi Arabia’s rail network is managed by the Saudi Railway Organization (SRO). In the 1990s, the SRO carried around half a million passengers and nearly two million tons of goods annually.

There are plans to extend the railway to the Jubail Industrial City on its eastern end and, eventually, to Makkah, Jeddah and Madinah on its western side. Yet another extension would link Riyadh to the mining areas in the north. This expansion is being carried out by the private sector.