The Basic System of Government identifies the nature of the state, its goals and responsibilities, as well as the relationship between the ruler and citizens. It defines the Kingdom of Saudi Arabia as an Arab and Islamic sovereign state; its religion is Islam and its constitution is the Holy Qur'an and the Sunnah. 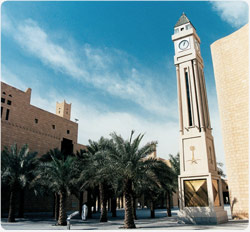 The King, who also acts as prime minister, ensures the application of the Shari'ah and the State's general policy, and supervises the protection and defense of the nation. The Crown Prince is appointed by the King. Members of the Council of Ministers assist the King in the performance of his duties.

The new bylaws introduced for the system in 1992 further explain that the purpose of the State is to ensure the security and rights of all citizens and residents. It emphasizes the importance of the family as the nucleus of Saudi society. The family plays a vital role by teaching its members to adhere to Islamic values.

In defining the relationship between the ruler and the people, the system emphasizes the equality of all Saudi citizens. All are equal before God and in their concern for the well-being, security, dignity and progress of their nation. All citizens are also equal before the law.